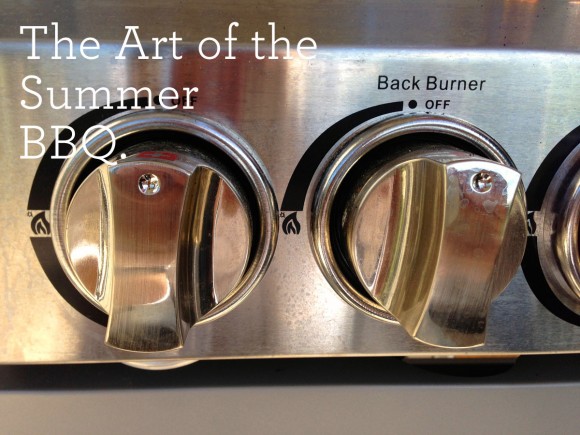 “Take the meat out of the fridge well ahead of time. Give yourself at least 30 minutes and consider the depth of the cut. If it’s a thick cut steak, say 200 or 250 grams, the meat will need 30 minutes.” says Kate King.

The GD Test: You can touch the meat without shock to body temperature. When meat hits the skillet, it’s warm, not freezing cold.

“Proteins of meat are sensitive to temperature abuse throughout their lifecycle. At Gourmet Direct we understand the lifecycle journey of muscle to meat. That’s important because once you shock meat with temperature abuse, the proteins tighten and they don’t release again. Although it’s not a bomb disposal exercise, you don’t have to be super careful with modern meats. With spring lamb, Rose Veal, good beef and venison, the proteins in the meat have to be treated with respect. That means no thumping it on the table and tenderising.

“Salt plays quite an important part in enhancing and drawing out good flavours in beef and lamb, but only put it on at the last minute. Salt extracts moistures, so don’t put on 30 mins before. Don’t use salt in marinade, unless you’ve got tough meat. If it’s tough, throw in a couple of kiwifruit too.”

“Use good salt, good pepper and good butter. Once you’ve oiled the meat with a good coating of olive oil, add a small quantity of Lewis Road butter on the BBQ straight before the meat. Consider inserting garlic inside if is a big slice of meat. These are just simple things done well.” 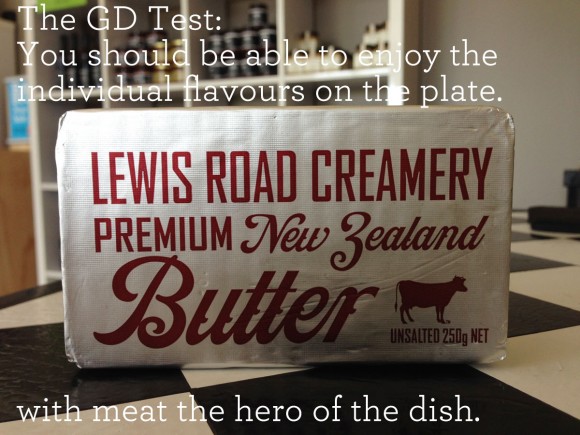 The GD Test: You should be able to enjoy the individual flavours on the plate with meat the hero of the dish.

“If you’ve got a good cut, you shouldn’t need to bomb it with a huge amount of sauces and rubs. Good quality ingredients, then common sense to a large degree. Your guest should be able to enjoy the individuals flavours on the plate, rather than making a ‘big meat milkshake’. You don’t have to do that unless you’re an astronaut!”

How to get the best from your BBQ

How hot should the BBQ be

“Overheating and searing way too hot isn’t a good idea for modern cuts of meat. You can get a good seal without smoking out the neighbourhood. Nine times out of ten, the proteins won’t like it too much. Turn your BBQ down and let the proteins settle. If you slow cook, gently sear and get a nice BBQ crust happening. Do what Americans do, let it cook slowly. If you’re going to do slow, do real slow. 2 hours isn’t slow.”

“Be conscious of what you add as marinade. Honey and pomegranate will burn on the BBQ. If you want those flavours, think about how to have them so they won’t be charred or ruin the flavour of the meat.” 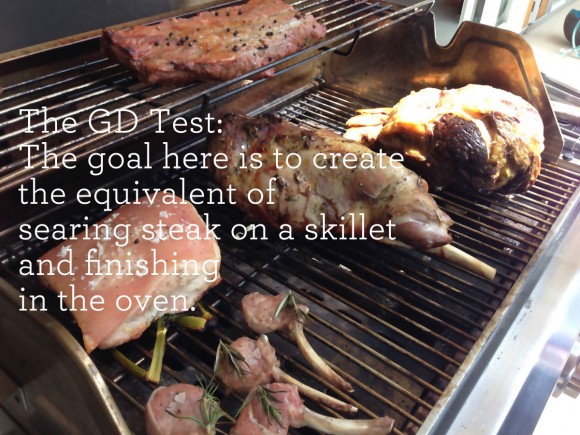 The GD Test: The goal here is to create the equivalent of searing steak on a skillet and finishing in the oven.

How long to cook the meat

For ‘rare’ cook 2 minutes per side.

Double the numbers for ‘well done’.

Half way in between for medium rare.

“It’s difficult to give advice for BBQ’s because the outside conditions change. On a cold day you’ll get more temperature fluctuation. If you spent 7 grand on a BBQ you can treat it more like an oven. You know your BBQ the best. If you’re using a BBQ recipe, take into consideration where the recipe came from. Look at original of recipe. English medium rare is a lot medium than rare. America is more rare than medium. Where was book published, where are they from. Chances are you need to adapt to kiwi BBQ conditions when looking at temperature conditions. Same with buying US thermometer vs English thermometer. Take this into consideration.

The GD Meat Test: Hold your thumb and forefinger together, then add your second and third fingers. The more give, the rarer the meat.

Rule is if its underdone you can do something about it. Overdone, it’s over. Less is more. Don’t be afraid to add extra resting time, especially if it has bone in it.

How long to rest the meat

The rule is, rest in the oven at 180 degrees for 3 minutes for beef. Every oven is different and you will know your oven best. Make sure you rest the meat after the oven too.

“Source a piece of stone to cook pizza on the BBQ, from the local headstone maker. Take advantage of your headstone maker before you’re dead! A good slab of stone is an essential in a kitchen. It’s also the cheapest place to get marble. Marble great for pastry rolling it, keeps cold. Marble is sensitive to knife cuts so talk to your headstone guy about the best one.

Fresh rosemary, aromatic herbs and stick them on the shelf underneath and that infuses a beautiful flavour.