There’s something to look forward to about January in NZ. I’m not sure why – maybe it’s just me because

I always look forward to my January copy of ‘Cuisine’ because it usually focuses on barbecues and beachesque food without too much pretentious padding.

Barbecue cuisine is fresh and exciting – we go back to the cave when we barbecue (some more than others depending on your) heading outdoors, hovering over flame. It’s one of the most interactive methods of cooking. Rarely do you get such critical audiences in mum’s kitchen over the preparation of a weekday meal. Stop to observe the behaviour and banter round a barbecue however and you will witness this interaction. Advice from unlikely sources and a competitive environment inevitably heats up. We women take the opportunity to allow the men folk to manage the cooking of the main event but only those who are tolerant of a bit of back seat driving manage the task without tension. 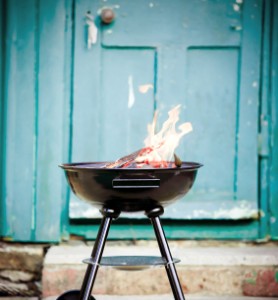 We don’t have a flash barbecue and I grew up with one of those ones that looked like it was designed in Liverpool. It had a circular plate with a smoke stack coming through the middle and you placed it over a real wood or Carbonette driven fire. Can you still buy Carbonette’s – I think they might be illegal now. Nonetheless it produced awesome charcoal flavoured steaks and sausages (I only remember one kind during childhood – now there are so many). This was back in the days when no one was gluten intolerant and everyone ate what they were given and didn’t want anything on the side. Forensics stayed away from food. No one cared where their food came from or if the chicken was cooped up or roaming the back yard, let alone organic and super phosphate ruled the rural world. How times have changed!

It is customary Downunder to burn the odd sausage or lamb chop on the Barbie but the investment in good meat these days requires us to revisit suitable cooking methods in order to induce pleasurable mastication of the finer cuts.

How to barbecue an Eye Fillet of Beef.

There are times when the barbecue can be used for the top shelf meat cut. Eye fillet or tenderloin has little fatty tissue so you need to plan and don’t let your cave man near it unless he is a wizard of the hot plate.

First tie the fillet tail underneath the centre cut of the fillet. Fold it back so it forms a consistent thickness along the whole fillet. Tie the fillet at regular intervals with cooking string. No plastic! Bring the meat to room temperature or so that it does not feel cold to the touch. If you have used a marinade pat the meat as dry as you can get it with a handy towel.  You will get a better crusty sear this way.  Once the initial sear is done you can begin to baste again with reserved marinade. For a 1.8-2kg fillet you need to get your barbecue nice and hot. Sear on all sides rolling gently to turn. Don’t squeeze the life out of it with tongs. Turn the barbecue down to medium hot and allow to roast for approx 25 minutes for medium rare. Allow 20 minutes resting time. Turn the meat occasionally during roasting but leave alone during resting. If you are unsure of it’s doneness remove from the heat early – you can always replace it on the barbecue if it’s too rare after resting. Overcook it and you are toast. You will be amazed at how much beef cooks as it rests.

Tip: On colder, windy evenings your barbecue will take longer to cook things. The weather affects the caveman cooking times so bear this in mind.

Tip2: Place the beef in a shallow dish to rest. Cover. This will allow you to collect the resting juices and prepare a jus.

Serve with new potatoes, home-made bread and my favourite summer pea salad with a tomato mozzarella salad on the side (don’t discount the dairy free!)

Yes this is one of the best and my favourite ways to cook lamb racks. Barbecue and bone-in meat cuts go hand in hand. Make sure you get the racks with the wee fat cap left on or you will end up wondering if I have rocks in my head.

Take a twin set of lamb racks approx 450 to 500 gms per rack these days. Remove from their packaging and pat dry with paper towels. Combine half tbsp of good smoked paprika with half tablespoon of cumin seeds and the same of sea salt. Crush in mortar and pestle. Do not pulverize. Rub this mixture all over the lamb and leave to steep for 8 hours or overnight as a minimum.

Bring your racks to room temperature. Get the barbecue humming on high heat. Temp around 200 to 220. Again, take the weather into account.

Initially place the racks ribs down (so they sit on the bridge of the bones) for 10 minutes then turn the barbecue down to medium hot. Oil the plate with plain oil and flip the racks onto the cap. If you do it the other way round you will burn the spices. I don’t use olive oil to do this as I find it taints with barbecue cooking and upsets the gorgeous lamb flavours. Cook for a further 10 minutes. Remove from the heat and allow the meat to rest for 10 minutes. This should give you pink tender meat.

If you have smaller lamb racks than those I mention then adjust the times 5 minutes less for stage one and two.

Serve with barbecued eggplant (aubergine), roasted or barbecued peppers and tomatoes, red onions and fresh home-made Ciabatta. Make sure you have a really good fresh olive oil ready to dress your masterpiece. My sister-in-law is a salad wizard. She mixed a little basil pesto with olive oil and that was our dressing for a green salad over New Year – so simple but so good. 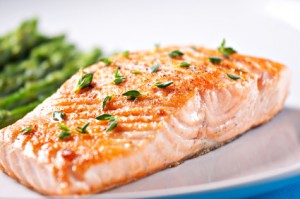 Take a 900 gm to 1 kg fresh tasty Salmon fillet with the skin left on. Trim the thin tail end off and snack on it or freeze it for use later. You want a nice thick slab of Salmon for this recipe so may need to trim the top tip as well. Combine a cup of sugar and a quarter cup of sea salt and tub it all over the Salmon (skin side down) in a shallow dish. Sprinkle the excess over the top. Procure 42 below feijoa vodka from your local liquor cave outlet or alternatively use verjuice which you could infuse with feijoa by cooking the fruit in the verjuice and allowing to cool before straining. In either case take a few tablespoons of the liquid and drizzle over the Salmon.

Tip: Use a non-metallic dish for this cure – metal will react with the salt and render a nasty tin taste throughout your dish. The cave will be unhappy and you may end up sleeping outside.

Tip2: If you’ve ever ordered steak in a restaurant and been told that you can only have it medium rare or well done – beware! This usually means that the steak has been precooked to speed up the delivery process to your table. The 90% cooked steaks are then allowed to cool, often stored in stainless trays in the restaurant fridge until your order comes through the kitchen door. The cold steak is then tossed onto the hot plate complete with stainless steel fridge taint. Revolting! But quite common practice.

Back to the Salmon… After curing wash the Salmon fillet to remove the salty mix. Pat the fish dry with paper towels. Discard all excess salt mixture.

Oil your gridle plate preheated to medium hot. Sear the salmon skin side down for 4-5 minutes until the skin releases from the hot plate. Gently flip the salmon and briefly caramelise 2-3 minutes before carefully transferring to a presentation plate to rest. Serve medium rare with slices and our famous Dill Mayonnaise on the side.